3) All populations are not uniform. 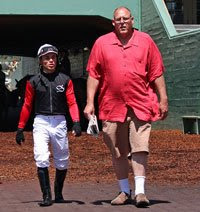 This post is part of series on 7 Principles every parent should know about dyslexic children.

I have outside of my door – in the hall a cartoon that I treasure. It shows a field with a tall tree to the left. There is a man in a suit n’ tie and he is sitting on the right looking at a line of creatures. A monkey, an elephant, a bird, a penguin, a seal, a dog and a fish in a bowl are sitting in a line on the left of the picture in front of the man. The man is smiling as he says – “For a fair exam everybody has to take the same tests – The first test will be to climb that tree.”

In all animal and human populations individuals are not uniform. They react individually to environmental stress and individuals grow at different rates due to genetic and environmental factors. If your child is one of the 10% of humans who learn to read at the age of ten when all of their peers learn a the age of 8 they may feel some pressure to confirm to what is considered “normal”. As parents every where know – normal can be set or changed very quickly by the environment we are in and by the friends we keep.

By allowing for your child’s individual response to pressure you are giving them permission to learn at there own pace. To state the obvious who cares if they can’t read yet – if they want to learn to read they will to the best of their ability. When you look at the next principal you will see why this is not as dangerous or risky as it appears to many parents and educational experts.

Your child is an individual so why are you placing him within systems that require he or she be one a face in the crowd. The schooling system of education was based on four widely divergent models combining together to create the American School system as we know it today. First the monks in the monasteries with in the idea of diligent and repetition to learn a task defined the highest of educational standards - for the 14th centaury anyway. Secondly the American government under the pressure of hundred of thousands of immigrants needed a way to quickly create a cultural common experience in a country that was filled with people who wanted to make it on there own. Third the American Factory system of the 19th century industrial age required workers who could fit into the mold and follow instructions. In the beginning and of this century the progressive social movement and the conservative social movement sought to support the development of American moral values by controlling the content of what is taught in schools today and for the last hundred years.

If you are unsatisfied as I am with my philosophical examination of modern schooling. There are Encyclopedias written on the history of the American Educational system – if you are new to those tomes – let me suggest for you a very quick and insightful read by John Gatto - Dumbing Us Down: The Hidden Curriculum of Compulsory Schooling.

Just so you know - I keynote on this topic the philosophical and historical realities of the school system with a M.S. in Education.